How to develop children’s writing ability??

” You can’t write sentences unless you have said them, you can’t say them unless you have heard them.” Using Pie Corbett’s process, children build up a bank of texts, both fiction and non-fiction which they learn orally. They can then tell the stories fluently, can discuss and evaluate the stories, and they gain a bank of vocabulary from which they can utilise to create their own verbal texts. The system follows three keys stages: 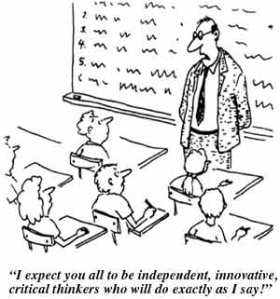 I have done this process several times with different age groups and I am amazed at the progress my students make. I usually teach new entrants / year 1’s but have done this with year 4 and 5 also. My year 1’s this year normally write about 3 short sentences before they give up. By using ‘Talk for Writing’ they develop longer sentences using the key vocabulary that has been reinforced using actions during storytelling. They are able to use the story skeleton to create their own stories, for example, using The three little pigs, to write: The three slippery seals, who have a shark that wants to eat them. Adorable! … and the feedback from the parents is wonderful!

The children go home telling the story to their siblings and putting parents to bed with a bedtime story filled with actions and expression. Usually, I spend a week learning the story during reading time. During this week we do some of Pie’s activities, such as drawing a story map together, discussing characters and settings, do a  story plan: title, setting, characters, beginning, middle, end, what the moral of the story is; practise writing sentences for sentence structure e.g. speech, beginning, end, use of adjectives etc. Then the second week we create our own story plan changing some elements, such as the characters: mice and a big bad cat, penguins and a big bad seal, the seals and shark, the fish, the lions, … endless. A second star challenge would be to also change the setting and the houses that they build: for fish – a sand house, seaweed house and a coral reef house. Then a three star challenge would also change the adjectives of the animals as well as how the baddie “blows” down the house, or what the 3 little animals do so that the baddie never comes back again. The children draft their version over 3/4 days and then you can discuss editing their story and publishing it to share with others. They are so proud of their book at the end!

Have a go and support your students writing and creativity.   See: http://www.talk4writing.co.uk A good book is: The Bumper Book of Story Telling into Writing at Key Stage 1  Pie Corbett (Author)